The Amazon rainforest is burning. Are your shoes, car seats, or sofa to blame?

New research by Global Canopy confirms what PETA has been saying for decades: Raising cows for their skin and flesh is responsible for 80% of the deforestation in the Brazilian Amazon rainforest. The group’s report exposes the link between Amazon deforestation and the leather industry, and you might be surprised by some of the companies that it names. 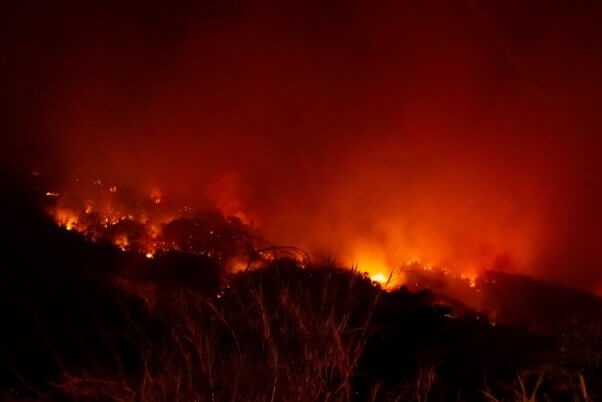 Global Canopy lists companies based in the U.S. or in Europe that import and sell a great deal of leather and could have suppliers that are contributing to deforestation. They include the following:

However, because of the numerous stages, processes, and facilities involved in turning cows’ skin into leather items, it’s impossible to link any leather company conclusively—and equally impossible to clear any of them.

“The report concluded, “No European and US companies appear able to guarantee their supply chain is deforestation-free.”

Make no mistake: Cattle ranching has caused 80% of the destruction of the Brazilian Amazon, and the leather industry as a whole is to blame.

And the beef industry is just as guilty. U.S. meat companies import $295 million in Brazilian beef every year, making our country a major contributor to the death of the Amazon and to climate change. 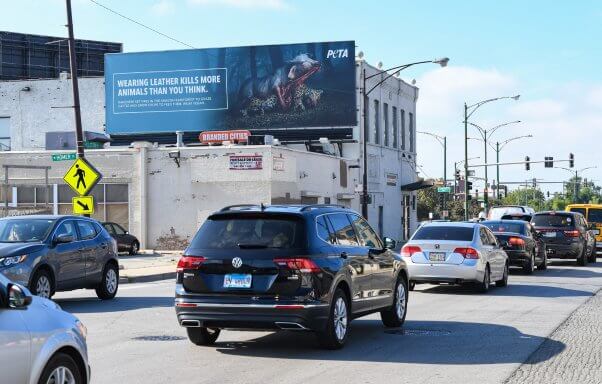 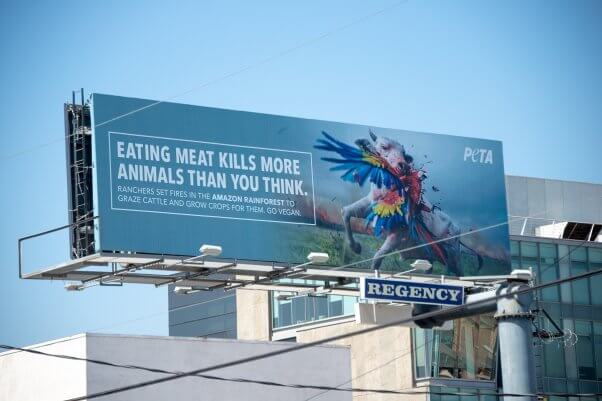 PETA billboards that have been placed outside the oldest U.S. leather tannery—the Horween Leather Company in Chicago—and near the Brazilian consulate in Los Angeles expose the link between the leather and beef industries and Amazon deforestation.

We can—and we must—save the Amazon. The way to guarantee that your home is deforestation-free is to choose animal-free foods and fabrics. That way, what remains of the planet’s rainforests is protected and there’s no need for animals to suffer and die. Every time we buy vegan, we drive companies to reduce their dependence on animal agriculture and embrace sustainable options.

Because of consumer demand, the vegan meat industry is expected to reach $85 billion by 2030, and many clothing brands and retailers already offer stylish and durable vegan leather made from plants and recycled synthetics. It’s time for a global shift to eco-friendly, humane food and fashion to help stop climate change and save lives—including our own. You can help by asking Levi’s to use vegan leather for the patches on all its jeans, as it already does for many styles:

Urge Levi’s to Help Save the Amazon

After Seven Years in a Dark Barn, Lily Jane Finds Light and Life